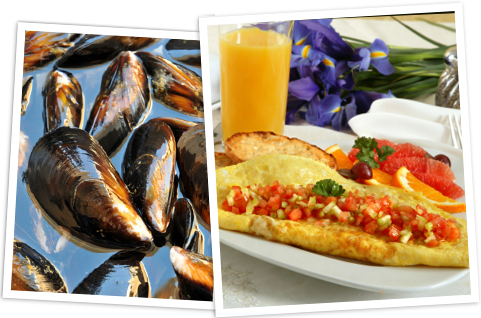 Mention Whidbey Island to any well-heeled Pacific Northwest traveler and cabbage seeds are not the first thing that comes to mind.

But cabbage seeds? Yes, it turns out that Whidbey Island is a major producer of cabbage seeds. But that’s just an interesting tidbit of agricultural trivia. I talked with some well-known agri-experts to find out more. The real story is that Whidbey Island, within a stone’s throw of Seattle and its suburbs, is a bountiful resource for fresh, seasonal foods. Surrounded by the temperate waters of Puget Sound and blessed with moist, mild winters and long hours of summer sunlight, conditions are perfect for the cultivation of outstanding fruits, vegetables, and flowers. The waters yield an amazing variety of seafood while rich pastures and idyllic ranches are home to grass-fed beef, lamb and poultry. Visit the annual Whidbey Island Farm Tour to learn more!

Another well-attended annual even is the Penn Cove Mussel Festival. Once a year a part of Whidbey Island goes happily nuts–for mussels! Not the kind you flex–the kind you eat! During this festival people go restaurant hopping and sampling each chef’s special mussel recipe while visiting cooks churn out batches of bi-valves for hundreds of happy mussel fans partying in a nearby tent! In the waters of Penn Cove the mussels grow naturally; attaching themselves to rocks on the beach, wharf pilings, boat hulls or anything else that spends some time in the water, there is the highest density of mussels naturally in Puget Sound. The mussel farm itself is a group of 42 rafts anchored at the western end of Penn Cove. They don’t do anything special to feed the mussels; they just give them a place to live! From those rafts hang some 30-thousand lines where the mussels attach themselves and grow.

So, even if you’re not prepared to “munch mussels” in the festival’s next speed-eating contest, take some time to leisurely “munch mussels” in any of the area’s restaurants that make the mighty mussel of Penn Cove part of their menu.

Coupeville has a number of spots to eat that will also not disappoint the hungry traveler.
The Knead & Feed Bakery, located on Coupeville’s waterside Front Street, offers homemade soups, sandwiches, and baked goods. Don’t miss the Marion-berry Pie. Come hungry and leave full.

Toby’s Tavern, a local favorite watering hole, housed on Front Street, has been a tavern/restaurant since the early sixties, although the building has housed a number of businesses since 1890. The bar was brought around the horn and was originally housed in the Fort Warden’s officers club in about 1990. Later it was moved to Fort Casey, outside of Coupeville, and then to the Central Hotel in Coupeville, and finally to Toby’s. Besides the bar, Toby’s is filled with Pacific Northwest memorabilia. Toby’s menu features Penn Cove mussels, fresh halibut fish and chips when in season, and an outstanding burger. It all can be washed down with a pint of Toby’s Parrot Red Ale.

Chef owners Tyler and Sara Hansen of the Oystercatcher, serve up a sustainable menu from local delights. Lacinato Kale tossed with butter, chives, shallots and garlic – all from Georgie Smith’s Willowood Farm. Or try the rack of lamb with golden chard, English peas and bronze fennel – so good!

The newest culinary stop in Coupeville is the Front Street Grill. Enjoy their braised short ribs or mussels with a wonderful green curry sauce while gazing out at Mt. Baker.

On south Whidbey Langley welcomes tourists to its historic buildings, filled with art galleries, book stores, fashion boutiques,  coffee shops and eateries. This “village by the sea” has an artistic slant, along with its charm and culinary delights. The village Pizzeria has the best pizza & pasta with a spectacular waterfront location. In the center of town, Cafe Langley offers a relaxing, intimate dining experience which pairs local products and Mediterranean cuisine. Gourmet soups, Northwest lamb, and local seafood are all specialties here.

On top of the Star Store with an above town attitude a great open air patio is the Prima Bistro, a french inspired Northwest Bistro. Only the freshest ingredients used here and “Oh did I mention the Burger is to die for served with a mound of Pomes Frits.” Fresh Fish and Seafood, cheeses and wine Oh La La.

When guests arrive for the prix fixe diner at the world famous Inn at Langley,on the waterfront, they stroll past Chef Matt Costello’s own herb garden before hearing his mouth-watering preview of the evening’s meal – for example, fresh corn polenta with locally foraged mushrooms, or a main course of Whidbey Island lamb on panisse cake with yellow pepper oil and green garlic. Sure to satisfy the most discerning gourmet.

No matter what your tastes are, you’re sure to find a culinary delight on Whidbey!

Comforts of Whidbey B & B

Wildwood Farm B & B

The Bluff on Whidbey B&B